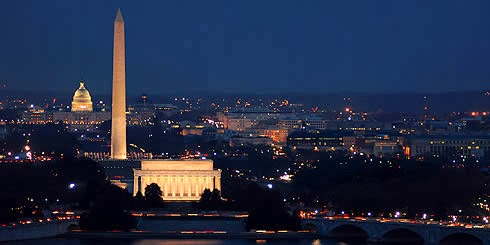 It was about 20 minutes until the competition started. The competitors were spread throughout the room. TV crews and reporters were everywhere. The Mouth of the South, doing his best to live up to his nickname, was delivering a lively interview to a female Japanese news team. The shining symbol of his last victory was draped over one shoulder like a championship wrestling belt.

Outside, in the near 100 degree heat, the competition arena was being carefully prepared. Eight small glasses of water were placed near each of the 13 large, white name cards.  Red and blue balloons fluttered in the slight wind. The super-heated crowd swelled, finding the best place to watch their favorites. With about 8 minutes to go, the final filled aluminum trays were brought out and placed on the tables. This was brash. This was big. This was the annual Independence Burger Eating Championship, sponsored by Z-Burger and this year being held at the Z-Burger in Washington DC's Tenleytown section.

Most of the cameras and the largest section of the crowd was directly in front of the center table where 24-year-old Pete "Furious Pete" Czerwinski from Ontario, Canada, would be trying to win the DC national burger competition for the 4th consecutive year. Czerwinski had finished first in more than 50 eating competitions around the world, including the Pizza Eating Championship in Rome Italy. He was also famed for eating a 72-oz steak in 7 minutes.

Next to him was his stiffest competition and the best American hope to capture the DC crown. That seat belonged to Dale "Mouth of the South" Boone, a 300-pound, 41-year-old competitor from Atlanta, Georgia. Boone had starred in the made-for-TV movie Gutbusters in Alaska. He had also appeared on The Tonight Show with Jay Leno, The Weakest Link and about half a dozen other shows. Boone, who has been competing as a professional competitive eater for 11 years, had finished 2nd to Czerwinski for the past 3 years. Many in the largely American crowd hoped this was Boone's year to bring that title back across the border.

The basic rules of the competition were simple. The winner would be the eater who could devour the most plain hamburgers and their buns in 10 minutes. All must completely finish a hamburger before they could start on the next one. The eaters could use or drink the water at their tables, but they would not be permitted to regurgitate any of the food back into the cup and then re-eat it.

Most of the enthusiastic crowd was prepared to witness serious eating. But several members of PETA circulated around the grounds, passing out literature urging spectators to go vegetarian or vegan.

With rousing sports-arena music blaring in the background, Metro DC DJ Jarrod Wronski took to the mike, employing his best ring announcer's voice to introduce the one female and 12 male competitors. Once seated,  they finished their last pre-task, unwrapping the 20 hamburgers in the tray. Behind each competitor stood a specially-chosen female wearing a tight red top and extremely short black shorts. These girls would hold up numbered cards as their competitor completely consumed each hamburger. That way the crowd could keep an unofficial tally of results.

Watching this contest revealed several different styles. Some of the competitors stood. Some sat. Some altered positions. Some drank sips of water before they ate bites. Others after. Some dunked the hamburger in the water and then ate. But for all, the eating was fast and the eating was frenzied.

With the song parody "Eat It" by Weird Al Yankovic as background, the contest approached the half-way point. "With 5 minutes to go, it's 9 for Furious Pete with the Mouth of the South at 7," Wronski explained, before exhorting the crowd to unleash an "Eat, eat, eat" chant.

"There's 1 minute remaining. Go, go, go, go," Wronski said, the crowd picking up his chant and the song shifting to Bruce Springsteen's "Hungry Heart." "Let's count it down. 10 ... 9 ... 8 ... 7 ...6 ..."
At 1, the competitors dropped any bits of uneaten burger to the table. However, the contest was not concluded. In order to be eligible for cash, prizes, and the title, the competitors had to refrain from throwing up for 2 full minutes.

Several minutes later, Wronski began announcing the top 5 finishers. With only numbers 2 and 1 to go, neither Boone's nor Czerwinski's name had been called.  "At number 2, with 13 burgers eaten it's Dale 'Mouth of the South' Boone," Wronski exclaimed. "And our winner, with 15 hamburgers, once again it's Furious Pete Czerwinski."

Wronski brought Boone to the mike. "Will you be back next year?" he asked.

Then it was the champion's turn. He said it felt "awesome" to win the DC title for the 4th time. He, too, pledged to return to defend the title. He finished by saying that he would be competing in a New York City July 4th eating competition the next day. "But right now, I don't want to think about food until tomorrow," he said.

Tales, Tidbits, and Tips
As part of the Independence Day holiday promotion, Z-Burger offered a free burger, fries, and drink to everyone who witnessed the competition. As we stood in line for our free food, I noticed last-place competitor, 23-year-old Washingtonian Mark Rosenberg, joining a large group of his friends who had come out to support him. "The meat was so dry, so dry and I stink," Rosenberg, who finished only 2 hamburgers said. "But you had the most friends here," one of 2 females in the group said. "You know, you're right," Rosenberg replied. "I would much prefer that to any title." Now what was that about winning that Vince Lombardi supposedly said? Of course, he was talking about pro football, not professional eating.
Posted by Dave Price at 2:43 AM

Check Out Our Companion Site - Counter Culture in the Capital 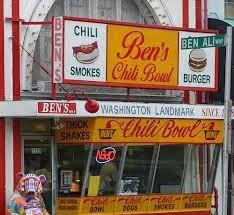 Check Out Our Companion Site - By the Book DC

Click on the pix to go to the page

The Prices Do DC

Promote Your Page Too

To access The Prices Do DC archives and check out older posts, please go to the archives listing located just under the posts in the right section of this page. The archives run from June, 2011 to date.

DC and Us: Perfect Together

In June 2011, I retired as an English teacher in an urban high school. One month earlier, my wife, Judy, had retired as the manager of a custom frame shop and art gallery.

We sold our South Jersey home of 33 years and moved to a 2-bedroom apartment in Crystal City, directly across the Potomac from Washington, D.C.

Within an extremely short time (I say minutes; Judy says days) we realized that we had made a perfect decision. We loved DC.

The Prices Do DC is an attempt to share that love of place and what we are doing on a regular basis with you.

Journal writing such as we are attempting here is about the process of recognizing, recalling, recording, and remembering. As such, I think our blog has 3 audiences. First, and foremost, there is Judy and I. Call it our electronic scrapbook. Next, there are our grandchildren Audrey and Owen. When we are no longer here (and may those days not come for a long, long time), we hope they can still visit these pages to find out what their grandparents were interested in, did, and liked during their DC years. Finally, if you are reading this, there is you.

Like all successful projects, The Prices Do DC calls for a clearly defined division of labor. Here is ours. We jointly plan. I make a list. We travel together. Judy is the financial overseer. I record our observations in a small notebook. I eat a lot. Judy eats a little. Once home, I create the posts. Judy edits them. I design the look. Judy has her final say and pushes the publish button.

And now the work falls to you. Please enjoy what we have created. And if you do (or if you don't) let us know. Attach a comment somewhere on the page here. Send us an email. Knock on our door. We're waiting to hear from you.

How to Reach Us

There are 2 ways to contact us:
1) attach a comment at the end of any post
2) send us an email directly at dleeprice @comcast.net
Either way will let you send us a shout-out.

What's The Weather in DC

Extra! Extra! Read All About It

Checking out the front pages at the Newseum

The Beltway and Beyond: DC's Best Blogs

All the DC News You Need

The Best Planning Sites for DC Day or NIght Trippers

Links to DC Lists for Visitors and Residents

6 iPhone Apps You Need in DC for a Better Visit

The Monuments and More

DC Memorials Most Worth a Look 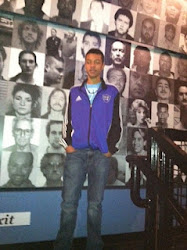 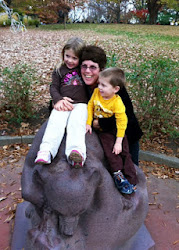 At the Zoo: My wife, Judy, and our grandkids Audrey and Owen

DC Think Tanks With Events to Expand Your Brain

President Obama Ate Here, So Did The Prices, and So Can You 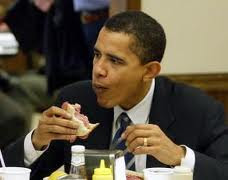 Where the Bands Are

The DC music schedule is packed

Brought to You By

The Prices Do DC is a blog produced by the Davidson Digital Network (DDN), a division of OAPI LLC